The Description About the instrument “Theresyn” that I designed its concept.

I'm originally a keyboardist. Since when I met Theremin that doesn't have fixed notes like a normal instrument (I Would say, the theremin is totally free articulation instrument ) I was so attracted to this...Then Theremin became my main instrument at my music performances. However I feel several dissatisfactions with Theremin and started to feel a necessity to improve it, To play Theremin, the player should move the part of their body (mostly both hands) against the antennas, closer or farther. In this way, the percussive or plucky sound is almost impossible to get. Also, it hardly plays a very fast melody like “The flight of the bumblebee”. The timbre of Theremin is completely static. The players can choose the timbre by themselves but the timbre never gets affected by articulation (for Ex, pianoforte) nor the passing of time. And the sound itself is very dry so it's pretty tasteless unless using some effect box or playing at the venue that has a nice acoustic. On the other hand, another oldest electronic instrument called “Ondes Martenot” has many variations of timbre due to a different kind of speaker system and also has varied dynamics articulation by its mechanism However, Ondes Martenot is so fragile, rare and expensive and still not perfect to me so I decided to produce another new free articulation instrument.

The First Step:I started to modify Theremin that I was often using in 2013

This is called Moog EtherWave that is the most popular Theremin in the world now. I asked Mr Yves Usson who is a famous analog synth builder and he lives near my place where I live to add the trigger button (to start sounding) and toggle switch between antenna mode and trigger button mode. With the button mode, I could play faster than the antenna and get percussive attack sound. However, I had to use the volume pedal to control the dynamics in real-time. I have already been using external synthesizer modules and the effect boxes to get the timbre variations. I was quite happy with the sound which is the result of the effort of connecting many cables carefully between each machine and find enough number electricity power source. Yes, it was OK to me even if, sometimes some of the machines stopped working suddenly(I always had the plan B).
Even if I had to pull away from the elongated colourful snakes who don't want to leave their lovers because they love each other too much, I said I'm alright. After a while, I fed upon the management of machines and snakes and got the idea to integrate everything in one cabinet and connect only one cable to a power socket. 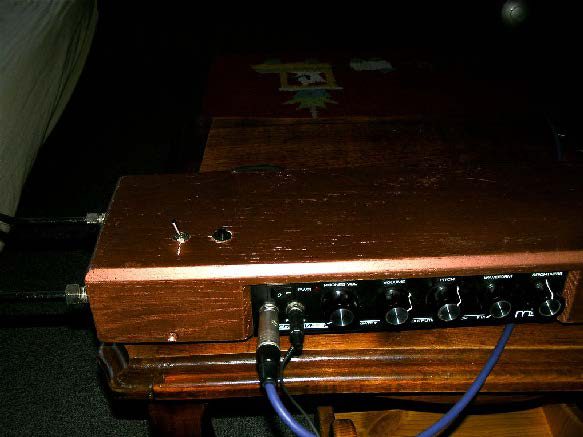 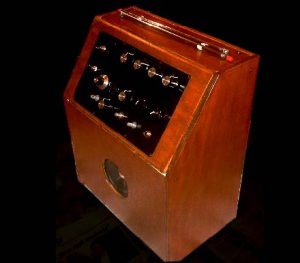 In the spring of 2014, prototype #1came up. I disassembled Etherwave and a compact amplifier, and combine it with a synthesizer module that produced by my friend (he is a famous analog synthesizer builder in the world) into a single cabinet. This just looks good but never worked properly so I used this as research material. 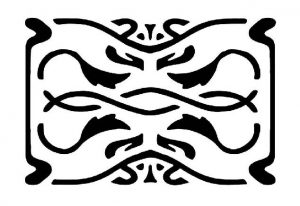 In the summer of 2015, The first playable model came up. (right photo) The circuits are designed by Yves. This is the fundamental of everything. I adopted a folding telescopic antenna considering the ease of storage and convenience. However, U shape copper antenna was too heavy. It has been broken during the concert so I changed this also to telescopic. The pattern of the surface is designed by myself. I picked up some material from the Art Nouveau design collection and modified it (squeeze, expand, simplify, cut, add) combined and layout. 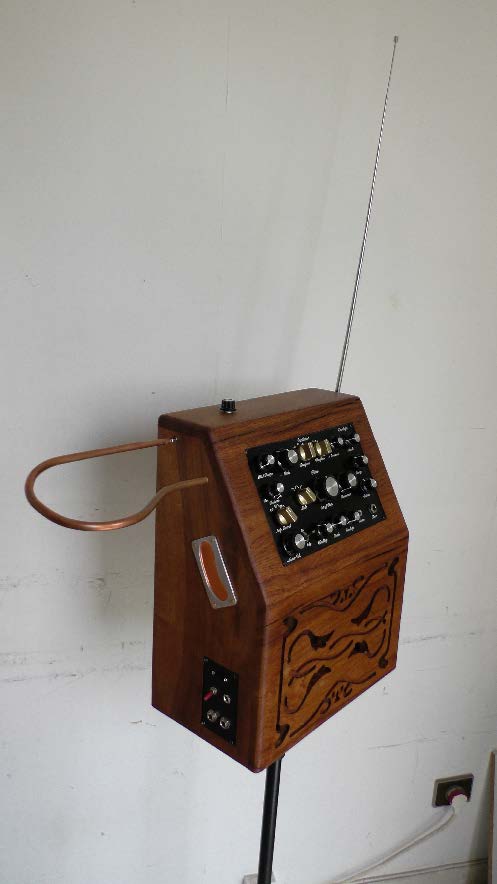 Not only myself could have idea of hybrid instrument with Theremin and synthesizer. There are actually,similar type of instrument on the market. The basic idea is quite simple. Convert audio signal to the control voltage and drive the synthesizer components such as oscillator, filter ant amplifier. However I have my original goal. I wanted it as musically very expressive and useful, sound so unique and beautiful. I aimed for one and only with several original ideas.

As I mentioned previously, to control the dynamics of Theremin player must move the part of one's body against the antenna. Obviously, there is a limitation of the speed. This is good to slow classical or ballad song but not for the high tempo music. To avoid this frustrative factor, I adopted a button to trigger the sound but it wasn't enough. The speed is also limited with a single button and piano/forte or continuous dynamics control is not available. So I got an idea to use a touch and pressure sensor to fill all my needs I could play very fast notes, get piano/forte as I wish, control the crescendo and decrescendo freely. 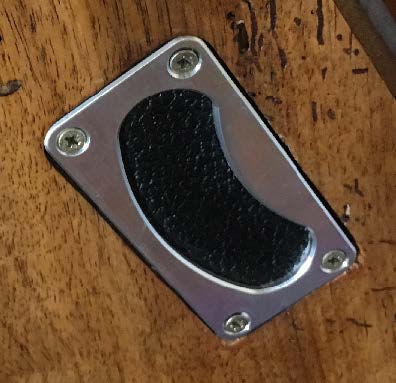 We could say “Ondes Martenot is a brother or sister instrument of Theremin”. There are several different types of loudspeakers for Ondes Martenot. Among them, the unique and distinctive feature is a speaker with sympathetic strings called a Palm diffuser (looks like an ancient string instrument). It gives a very gentle and natural kind of reverb. AT the beginning of the production, I just placed several strings to resonate the audio from the internal loudspeaker, but the cabinet is not large enough to enhance the resonated string sound, (the cabinet is not even designed for audio) So, after some study. I adopted the bone transducer (vibrating speaker) to force vibrate the strings to get a louder sound. At the same time, I 'm thinking about the device to resonate sound beautifully. The idea is from my experience of Indian classical instruments such as Sitar, Sarod and Esraj. Those instruments have bunch of sympathetic strings and the special bridge called Jawari that generates the side band for resonated note. 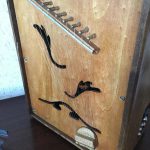 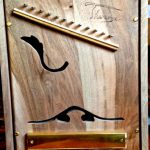 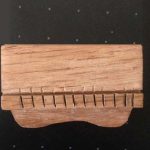 After many trials, I went to India and ask to make a jawari for an Indian instrument craftsman. Use what he made for me as a reference, I (actually one of my friend who is a wood craftsman )could make Jawari by himself. Eventually, this idea makes Theresyn as really unusual original instrument. 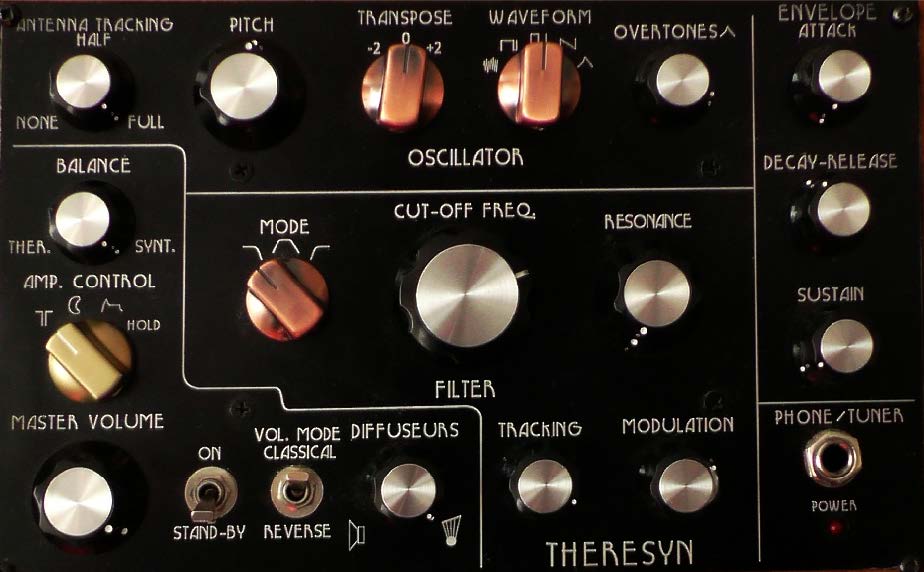 The control panel of Theresyn
(The final version）

The Value of Theresyn as muisc instrument and its originality

Theresyn can sound “the sound that nobody ever heard”. And this could be a useful instrument also for the disabled people (Of course theremin itself could be but Theresyn has more feature for musical expression). The features are,
Theremin and Synth can sound together.
Uniosn, octave unison, 2 to 3votaves unison, intervaled unison are available.
Give different pitch tracking slop to the synth.
Theremin and Synth never go together.
Stnth pitch is fixable.
Synth canbe a droner. You also can play this like digeridoo with the setting of VCA.
White noise
Using white noise and some filter setting, Theresyn can sound like whistle or flute.
Envelope generator.
Dynamics and the timbre can be controlled by envelope generator.
Reversed amp antenna mode.
Normaly if you go closer to antenna, volume is reduced but you can reverse this.
Drive external synthesizer(Expandability).
This has control signal output so you can connect this to external synthesizer or something that can be controlled with trigger and the voltage. 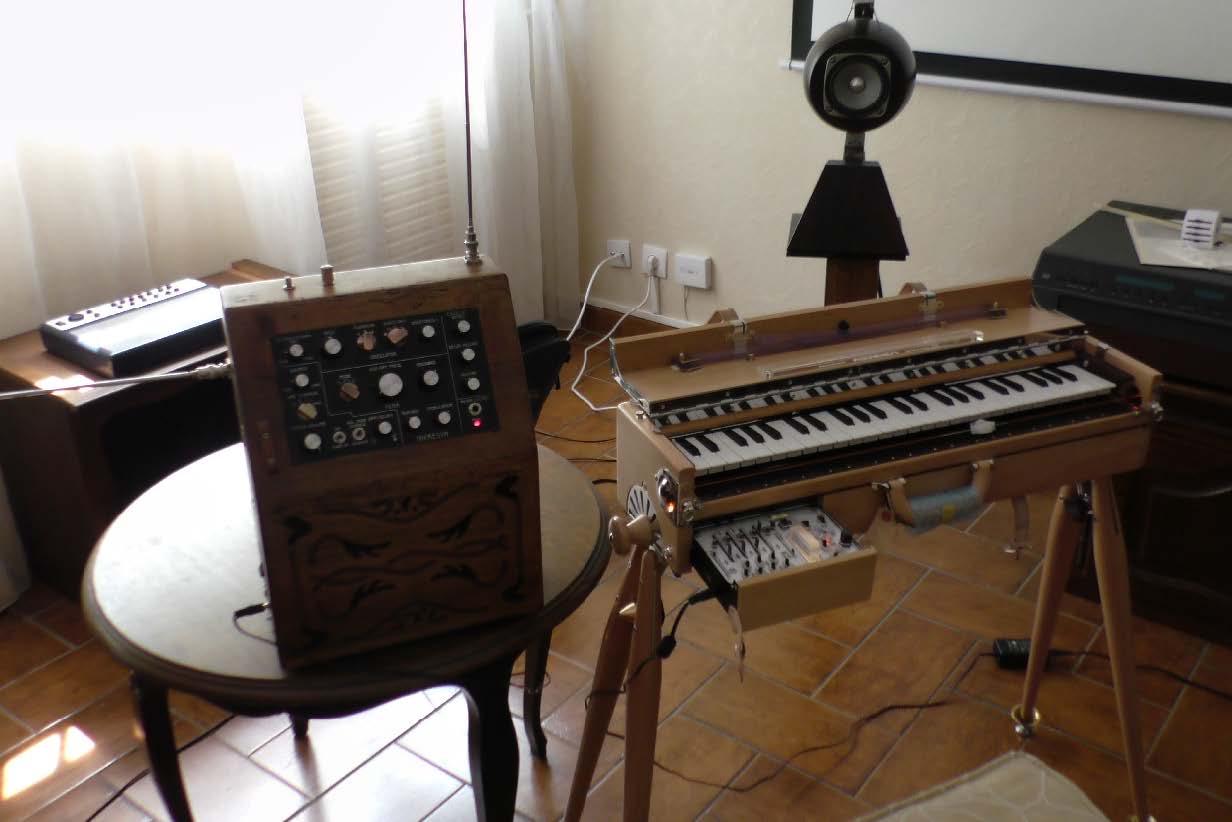